This is Rg Guinolbay. Today I will write about the top 5 scariest places.From creepy trees to scary craters,we count down all these things. Let us start with  the top 5.

5. The Balete Tree of Aurora

This tree has an opening in which you can go inside. But a creepy fact is that you can see strange outlines.On my three day visit there,I saw an outline of a hanged man,a face, and a woman. I experienced this on my 3 day trip to Baler.I will write about it later. Anyway, this picture was taken by Ate Rona during our trip. 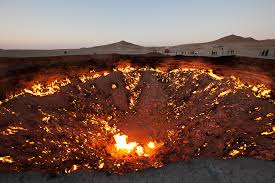 This is  number 4 on my list because I’ve seen much creepier stuff in my travels.  Really, literally this  crater is called  “Hell on Earth” Okay, this so called crater is actually the fault of miners. In 1971,miners were searching for gas reserves. Then,a big hole collapsed where they were mining. There were poisonous gases in the hole so the miners started a fire to burn off the gas. But,the hole kept burning ever since. And since it was a large hole,it kept being fed with oxygen.Rumor has it,that 4 scientists saw a demon saying in Russian ‘I will conquer the Earth’. Scary or what!?!?

No,this theater does not look as it seems. This theater has a tragic story. I put this in my list because this theater is next to my mom’s (Marianne Guinolbay) office,  the GSIS.  At around 12:20 midnight of August 10, 2015, my Uncle Dino, a DILG NCR employee and the members of the Quezon City and San Juan City Disaster Risk Reduction and Management Offices, recently inspected this area during the APEC. He mentioned that it was one of the “staging areas” – where DRRM resources are located for immediate response. Uncle took pictures of the theater and the DRRM equipment and facilities. When he viewed the pictures, one picture showed pure blackness. Although he said he never took a picture of anything black. But he felt a strange presence like someone was watching him as he was taking the pictures. He later confirmed from his companions that there was some kind of accident which killed around a thousand workers. This building is really creepy even if viewed from afar. With that, he deleted all the pictures from that place and asked apology from the spirits there.

We’ve passed this place twice when we were trying to avoid the traffic. According to my lola, Atty. Julita Aningat,  she was informed  that the white lady appearing in this street is her relative. The white lady’s name is Maria Garchitorena. She was to supposed to get married but she was allegedly kidnapped and raped by a taxi driver. And she was haunting the place ever since.

This was a disco house before. My mom  said that it was during 1990s that a technical malfunction/failure that  lighted a fire that burned the whole building down.There was no fire exit so the people were trapped inside while they were racing to the door.If you go there,you might still hear faint disco music or screams.The last time my mom,  and I passed by the place it was now converted into a parking lot..

There you have it, my top five scariest places.

Look out for more of my stories.